skip to main | skip to sidebar

For those of you wondering, the Bear emerged from the fire unscathed. The neighbor’s garage went up in flames, but the Bear survived without a mark. A true ursine miracle. So, he is still there, in the wilds of suburban Connecticut, in all his glory. He continues to mark every season, holiday, and world event with his own brand of style. And I will continue to visit periodically if only to keep up with the season's fashion.

Obviously, since I moved, I no longer live next door to the Bear. I was feeling a little lost until I came upon this guy for sale. When I saw this face, I knew I had to rescue him. He looked like a good listener. And he is.

When I got him home and looked at him closely, I saw a distinct resemblance to George W. Bush. He’s got that same goofy, confused wince to his expression.

Ladies and gentlemen, may I introduce… Dubya.

I love having him here and talk to him daily. He’s a constant reminder that even though I have strong opinions and sometimes see things in black and white, given the right context, I am fully capable of changing my mind.

For example – I did not vote for Bush#2 and when he was POTUS I generally regarded him as the WORST PRESIDENT EVER.

Since my diagnosis, I’ve heard “you’re so brave, you’re so strong!” from more than a few people. I’m not braver or stronger than anyone else. I just did what I had to do to survive. I didn’t think about the past because it was over and frankly, I was glad. My future wasn’t guaranteed, so I didn’t make plans. All I had was the present day and I just focused on doing what was required to get through the day.

I’d like to say that Cancer helped me learn patience and grace and a whole laundry list of other pious and Christian virtues. Yeah, not so much.

If you’ve never been to a Cancer treatment center, it’s a big room with about 25-30 big, cushy recliners because infusion takes a few hours and they want you to be as comfortable as possible. They serve snacks and beverages (I kept asking for tequila, but nada). There’s usually a TV in front of each chair, but to be honest, I didn’t see many people watching them. Most read or sleep or if they’re lucky, a family member or friend comes with them and they chat quietly. Aside from the Cancer, it’s a rather Zen atmosphere. It’s a quiet place, we all realize we’re there for the same reason, so people are mostly respectful and supportive.


She was really disrupting the chill environment that the medical staff - works so hard to create. I could see that her whining was starting to make people uncomfortable. So, being me, I leaned over and said, “Why NOT you?”

That shut her up for a moment, but I could see she was far from done. So, I pushed. “Really. Why NOT you? Do you think that people DESERVE to get Cancer? Look around this room – can you honestly say that anyone here deserved to get sick? That they deserve it and you don’t?” And of course, being me, I had to take it that one more step. “Cancer isn’t a punishment, it’s an illness. It’s life. And it was just your fucking turn.”

At which point, she burst into tears and ran for the ladies’ room. I shamed a cancer patient and drove her into a melt-down. Go me.

As I said, I’d like to say that having Cancer taught me patience, but it hasn’t. I think it just rearranged my priorities. And it released my inner bitch. Not that she was ever hiding.

I still have a low tolerance for bullshit, I just don’t sweat the small stuff or stress out over things I can’t control.

For example – I pull up to the drive-through pharmacy and there’s a car in front of me. The person is asking the pharmacist questions about their medication. The driver is having a hard time hearing and communicating through face masks.  I get that. These are crazy times and people are scared. I’m not going to push. My turn will come.

However, should the idiot behind me beep his horn (because his time is SO much more important than anyone else’s), well, I may just slow down and when it’s my turn, I’ll have a LOT of questions for the pharmacist. 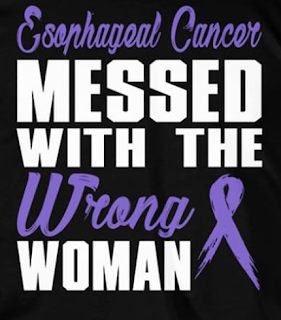 Being a rather private person, I only shared this information with those who needed to know. I saw no need to give day-by-day updates on treatments, surgeries and doctor visits. Now that I’m on the other side of this, it’s a little easier to talk about.

In August of 2018, I found I was occasionally having trouble swallowing solid food. I chalked it up to eating too quickly but it continued, and when I dropped 25 lbs in the month of September, I knew something wasn’t right. My doctor sent me for a Barium Swallow test which confirmed that there was a blockage. I was diagnosed with Dysphagia and referred to a gastroenterologist. At my consult, they assured me this is not uncommon and that endoscopy and dilation should have me back to normal in no time.

So, on October 4th, I went to the hospital for an endoscopy.

From the gastroenterology unit, I was sent to the ER for a CAT scan and they promptly admitted me. On October 5th, I met my oncologist. On the 7th I underwent surgery to insert a feeding tube in my stomach and a port just under my right collarbone. On the 8th, I had my first PET scan. On the 13th I had my first chemo treatment.

Adenocarcinoma of the esophagus. I had a malignant mass where the esophagus meets the stomach. After two weeks in the hospital, I was sent home and underwent chemo every two weeks through October, November and December of 2018. The month of January 2019 was double the fun with bi-weekly chemo and 28 rounds of daily radiation therapy.

On March 29th, I underwent a robotic “minimally invasive esophagectomy” or as it’s commonly referred to, the Ivor Lewis procedure. “Minimally invasive” translates to “instead of one giant wound, we’ll give you about 25 smaller ones all around your torso.” This procedure took 12 hours – halfway through, they flipped me over and deflated a lung to complete the rebuilding of my gastrointestinal plumbing.

What tiny bit of stomach I now have is resting comfortably just under my sternum.  I was feeling insulted by the phrase “minimally invasive” until I saw photos of people who had the traditional procedure. The scar is commonly called the “shark bite scar” for good reason – it actually looks like the person has been bitten in half. Having seen that, I will never again complain about the dozens of scars and dimples that now decorate my torso.

But I digress…
Son O’Mine tells me that when I came out of surgery, I had so many tubes and lines coming out of me, I looked like a cyborg. They gave me great drugs, so I’ll just have to take his word for it. After 12 hours in surgery, 2 days in ICU and a week in the hospital I was home again.

To make a long story short, on June 3rd, I returned to work part-time for two weeks and then resumed full-time work.

I am still here because of the brilliant medical team at Midstate Medical Center here in CT led by my oncologist, Dr. Gerard Fumo. This man is a WARRIOR. When we first met, he told me “Joni, this is not a “treatable” cancer, this is “CURABLE.” I responded so well to his aggressive treatments that they turned what was originally a Stage 3 diagnosis to a Stage 1 (only microscopic cells left) at the time of my surgery.  He and his team were completely invested in my recovery and they held my hand every step of the way. If anyone ever tells you there are no angels on earth, they’re wrong. I’ve met them.

My recovery has been long, but every day is a gift that I appreciate. The “new normal” takes some getting used to. For example, with the new, tiny, relocated stomach, I must eat 6 small meals a day – small portions, tiny bites. So, while I dream of chomping down on a cheeseburger, my reality is that I nibble like a mouse. No more big bites. Also, it took a while for me to figure out why overeating made my back hurt – until another survivor explained to me that now my stomach is higher so if it expands, it competes with my lungs for space inside my ribcage. Hence, overeating = back pain. And the difference between eating enough and eating too much is ONE BITE.

*I am taking part in The Esophageal and Stomach Cancer Project (ESCP) by The Broad Institute of MIT and Harvard along with the Dana-Farber Cancer Institute. This is an exciting initiative that lets doctors, researchers, scientists and patients collaborate to find effective treatments and diagnostic procedures. I have had (knock wood) an exceptional response to treatment and if studying that can help someone else,#CountMeIn.

*Note: the ESCP project is currently on hold while our labs process COVID-19 tests.

So that’s the scoop, folks. I’m back. 50 lbs. lighter, a little worse for wear, a lot more grateful, and enjoying life.

All of the content here is my own original work (unless otherwise noted). Nothing here is to be reproduced in any way without my express written permission.

If you want to use something, send an email to
jonimgreene@gmail.com and ask politely.

Do not just take it.

Don't even think about it.

I will hunt you down.